We want to make soft baby carriers available in postnatal, neonatal intensive care and special baby care units throughout London and eventually the UK.  The use of soft baby carriers in the precious few days after birth will be invaluable to both mothers and healthcare providers in the following areas:

skin to skin & kangaroo care
Kangaroo care is a method of holding a baby that involves skin-to-skin contact. The baby, who is 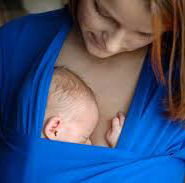 naked except for a nappy and a piece of cloth covering his or her back (either a receiving blanket, the parent’s clothing or ideally a stretchy wrap), is placed in an upright position against a parent’s bare chest.  The longer the child is held against the parents skin the quicker and better the outcome.

The use of a stretchy wrap under a blanket or parents clothing means that the parent isn’t stuck to a seated position. They can wander around the ward, use the facilities and be more independent and less reliant on hospital staff.  The more active the mother is after the birth the quicker the healing begins.

What are the benefits of kangaroo care?

Many thanks to www.bobafamily.com for the use of this information.